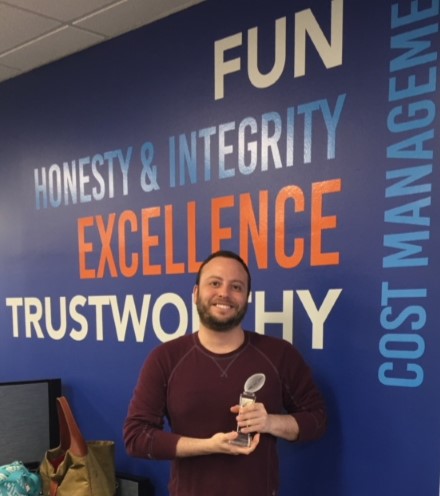 The Houston Corporate Team’s 5th Annual Venterra Fantasy Football League has officially come to an end, and a new champ has been crowned!

Each year a good number of our employees in the office throw their hats in the ring and draft a team with set weekly line-ups to achieve the most overall points.  Although, emotions can run high and the competition isn’t for the faint of heart, the Venterra Fantasy Football League is just one more way we like to fulfill our Leader Promise to make time to have fun!

Congratulations goes to “Hooked on a Thielen II” and their manager Jason Halpert, our Revenue Project Manager, for winning this year’s Venterra Fantasy Football League Championship!

The win marked the dethroning of last year’s champ, Daniel and the start of Jason’s year basking in the glory of a VFFL win while polishing the 2018 trophy with pride. He’ll also enjoy a little extra spending money as he and the next two runners-up, “Two-Peat in the Making” and “Every Day I’m Russellin‘,” took home $25-$125 for their success in the heated contest.

Nice work, Jason! We’re looking forward to seeing what the next championship has in store!