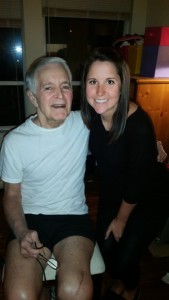 Our community teams do such an amazing job of WOWing our residents on a daily basis. They always have they’re listening ears on so they can act when an opportunity arises. And every so often there are WOW experiences where our residents are involved alongside our teams to help make a difference in a neighbor’s life. This recently happened at Champions Green Apartments in Alpharetta, GA. This experience was so moving that we had to share with everyone else.

“At Champions Green, we have a dear elderly couple named Joe and Diana. Unfortunately, over the past year, Joe has suffered from many illnesses, and one of which has caused him to be wheelchair-bound. Diana has done everything she can to help her soulmate and life partner – she rearranged their apartment so that Joe can get around easier, and she started working out with a personal trainer to build up her upper body strength so that she could help Joe in and out of the bath tub.  Diana is doing the best that she can, but there are simply some things that are out of her control; and they do not have a car which makes things extremely difficult at times.

Last week, we got a call from Diana for a simple maintenance request. When we went to the apartment to complete it, we heard Diana and Joe discussing how he was in desperate need of a haircut, but they could not get to a salon nor did they know how that was going to happen. After hearing this, we knew we had to figure out a way for Joe to get a haircut! We left their apartment and went back to the office to discuss ideas, when an angel appeared…Megan, a recent graduate of Paul Mitchell®, The School Esani walked in and overheard a bit of our conversation, and desperately wanted to help! Megan loves cutting hair and wanted to lend her services and cut Joe’s hair for FREE! How special!

We called Diana and Joe and told them the amazing news! We could hear Diana tearing up with joy over the phone! Later that week, Megan we over to their apartment to cut Joe’s hair. Joe loved his haircut and felt like a new man! And according to Diana and Megan, he was wheeling all over the apartment with joy! We could not have been happier! In return, we decided we had to do something for Megan because her truly touching selfless act! We gave Megan a gift card for anywhere so that she could use it wherever she liked.”

Thank you to Emily Serebrenick, Jennifer Glenn, Frances Yanez, Kathi Price, Zuly Lozano at Champions Green Apartments for wanting to find a way to make Joe and Diana’s life a bit easier and for Megan Pilcher for making Joe’s wish come true by giving him such a handsome cut.