It may not be our fault, but it is our problem.

These powerful words were spoken to Venterra employees during our Customer Experience classes in 2013. I never really thought much about these words in my own life, until one stressful day this past August.  I was traveling in Australia and New Zealand for the trip of a lifetime.  I had been dreaming of this trip for longer than I can remember and when it finally came, it was so surreal.  I booked 13 separate flights prior to leaving the United States on various airlines, which all had their own rules.  But I had everything in order, so what could possibly go wrong?  When I travel, I try to take each challenge as it comes and not let it affect the outcome of my trip.  And when traveling, I always think of various scenarios that could happen, but never actually consider that they will.  Well, my smooth journey changed as I was transitioning from Australia to New Zealand.  I had booked my flight on Virgin Australia but when I went to check in 48 hours in advance, noticed that the carrier was Air New Zealand (which is a partner airline to Virgin Australia).  I tried to add a bag when I went to check in but the website would not allow me. The same situation happened when checking into my flight from the States to Australia, so I didn’t think it would be a problem.

I got to their airport 2 1/2 hours in advance to check-in and make sure there was no problem with my reservation. But when I went to check-in, the kiosk wouldn’t allow me to add my bag.  Instead it gave me a print out telling me that I needed to see the ticket agent. I went up to the ticket agent to inquire about my bag, and to my demise learned that I would have to pay $120 since I was checking it at the airport. $120?!  I was completely flabbergasted.  I explained how I had tried checking it in online prior to coming to the airport. Long story short, I spent the next hour on the phone with reps from both Virgin America and Air New Zealand, but nothing could be done (so they said).  I was not going to miss my flight or risk my bag not getting on the plane, so I had no choice but to pay the $120 baggage fee. I reluctantly paid and rushed to my gate.

When I arrived in New Zealand later that evening, I waited and waited and waited for my bag to come out but it never did.  I went straight to the baggage agent to inquire about why my bag didn’t make it. I soon learned that my bag wasn’t put on the plane because the belt had broken. I had another flight out the following day to another city and informed them that I needed my bag. The baggage agent, said that I would have my flight the following day. Long story short, my bag didn’t arrive the following day so I had to fly (yet again) without it. I was pretty irritated at that point because of the empty promises.  Finally after wearing the same outfit for 3 days…my bag arrived (thankfully).

So why am I telling this story?

To me it was more of the principle. It may not have been Air New Zealand’s fault that the baggage belt had broken down. But I paid $120 to ensure that my bag would make it safely on the plane, and it did not. I tweeted my frustrations to Air New Zealand and was immediately contacted by a representative with an email address.  I explained the whole situation and informed the rep of what I do for a living (respond to complaints) and how Venterra’s policy is that we own the problem, even if it’s not our fault and thought they should do the same.

And that was it. That’s all it took. Air New Zealand owned the problem and refunded the money. So the lesson for me was to take what we (at Venterra) do on a daily basis and use it as a daily practice. And it did pay off! My relationship with Air New Zealand was mended and I was able to wear clean clothes again. 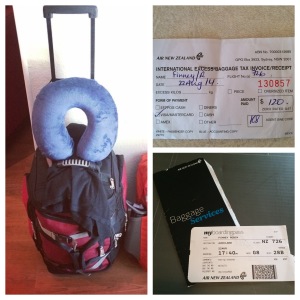